In long ages past orcs were feared as a mindless engine of expansionist destruction. The spawn of Gruumsh were given life’s breath to fight and consume, and that they did – with relentless fury. They were saved from this path of strife by the divine intervention of Luthic. The matron deity took pity on her children and throughout centuries shepherded them to self-determination.

Most of the orcs of Orth have now renounced Gruumsh, and forge their own path in the eastern lands of Eridor. Beyond Moradin’s Spine, a vast territory exists under their absolute control. 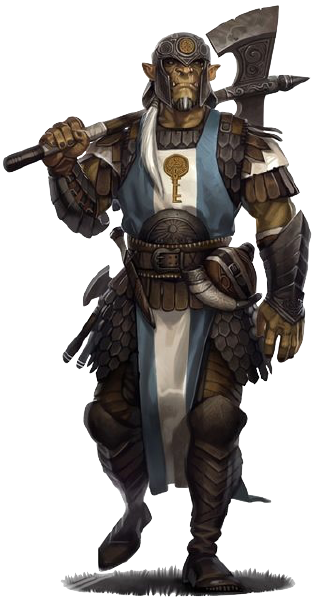 Darkvision. Orcs have superior vision in dark and dim conditions. They can see in dim light within 60 feet as if it were bright light, and in darkness as if it were dim light. They can’t discern color in darkness, only shades of gray.

Luthic’s Intuition. An orc has proficiency in one of the following skills: Animal Handling, Insight, Intimidation, Medicine, Nature, Perception, and Survival.

Relentless Endurance. When an orc is reduced to 0 hit points but not killed outright, they drop to 1 hit point instead. The orc can’t use this feature again until they have finished a long rest.

Savage Attacks. When orcs score a critical hit with a melee weapon attack, they roll one of the weapon’s damage dice one additional time and add it to the extra damage of the critical hit.

For orcs society is an ordered place, from military nobility at the top, to farmers and merchants at the bottom. This order is key to their culture, for it establishes a cohesive whole in which everything and everyone has a place.

At the pinnacle of the social order is the Lurz’esh – the Empress – appointed by divine right as the earthly embodiment of Luthic. By law the Empress owns all the land of the empire and the clans pay taxes for the right to live and work on it.

In practice, however, the role of Empress is at most ceremonial. Effective power rests with the Prime General – the Than’ak. It is the Prime General, and not the Empress, that controls policy, military, and feudal patronage. This happens even though, according to tradition, the former ostensibly owes their position to the latter.

An orc clan functions in a military-like fashion, and anyone that is part of a clan is considered to have noble right. Members of the Prime General’s clan are part of the Empress’s court and considered the highest rank of hereditary nobility. Noble ranking operates in a strict hierarchy defined by loyalty. Each clan’s noble owes loyalty to another, from the lowliest petty clan warrior, through the Urb’ak (the head of a clan), to the Than’ak at the top. A clan orc literally belongs to his lord and is not permitted to throw his life away – in battle, or otherwise – without their lord’s permission. However, even the lowliest noble has rights that the lower classes that exist under the protective umbrella of each of the clans can never achieve.

Young clan orcs are raised in schools by the (mostly) female clergy of Luthic, where they learn history, philosophy, and language in addition to martial skills. They spend years in these schools, rarely seeing their parents. At some point between the age of 10 and 14, they perform a rite of passage are considered an adult for the first time. An adequate marriage is soon arranged, for love merits very little place in the heart of an orc. Love and passion conflict with unquestioning devotion to one’s clan, and ultimately undermines loyalty. Despite this, family is a concept of critical importance to orcs, as it is Luthic’s wish that they’re fertile and plentyful.

Orc territory is broken down into areas controlled by vassal clans, or Urb’akai, each with a single ruler – the Urb’ak – that has risen to that position either by hereditary right, or proven military superiority. A Urb’ak is almost always married to the head cleric of the clan, and they pledge themselves to the Prime General. Their loyalty is rewarded with land and influence in it.

At vast bottom of the orc social order are the lower class commoners. They include ordinary common folk like farmers, merchants, entertainers (including actors, musicians), and any one living in orc territory that does not have orc blood. Members of the lower class are not allowed to approach the Empress or the members of her court under any circumstances, and must always treat members of the military class with humility and respect. A lowly orc who compromises the honor of someone that outranks them by being rude or insubordinate can expect to be killed on the spot, and the executioner would face no legal consequences for preserving his honor in this way.

Despite the apparently rigid structure of the classes, it is possible to move up into the ranks, usually by distinguishing themselves in battle or through marriage. This, however, seldom applies to those that are not of orc blood.

In orcs' strict society it is uncommon, but not impossible, to find people of mixed heritage. Some are fruit of unions that proved to be either political or militarily advantageous, and in those cases the half-orc offspring is fully integrated to the clan as any other pure-blood orc child.

More often, though, half-orc children are born out of romantic relationships involving lower class orcs or, much more rarely, orcs of a noble standing that break clan rank in the name of true love. This path is fraught with hardship and discrimination, as clanless half-orcs are deeply frown upon. 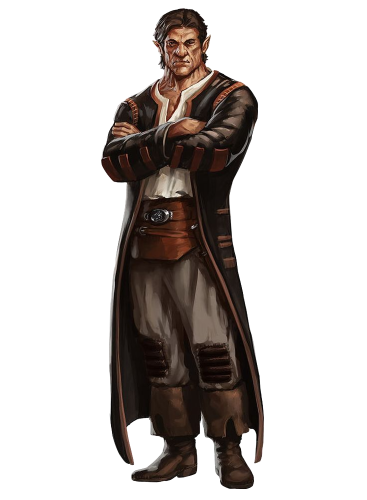