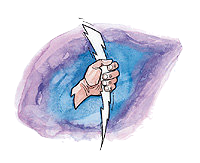 The deity of valor, Heironeous (high-roe-nee-us), appears as a tall human male with coppery skin, auburn hair, and amber eyes. He wears a suit of exquisite chain mail and carries a longsword. He wages war against evil of all sorts, especially his half-brother and nemesis, Hextor.

Heironeous expects his followers to uphold the highest ideals of chivalry and justice and to treat adversity as a challenge to be met and overcome, just as evil should be overcome. The world is a dangerous place where those who fight for justice and who protect the weak and the innocent face a never-ending series of challenges. He exhorts his followers to act honorably at all times, and to uphold the virtues of justice and chivalry with deeds, not just words. Those who face danger with certainty and calm will prevail against evil, Heironeous advises.

The religious hierarchy of Heironeous is organized like a military order. It has a clear chain of command, lines of supply, and well- stocked armories.

Clerics of Heironeous fight against worshipers and clerics of Hextor wherever – and whenever – they can and spend the rest of their time protecting the civilized lands from the threats of evil. Older clerics work as judges, strategists, and military instructors. The church as a whole is very militant, always championing some cause or embarking on a crusade to against evil or injustice. Though some find their high ideals and intense devotion to their cause a little intimidating, the church of Heironeous is widely admired. This admiration comes mostly because the followers of Heironeous battle genuine evils, usually with little thought of monetary reward. “Glory is the reward for defeating evil, while virtue is the reward for upholding the tenets of Heironeous,” say the clerics.

Temples to Heironeous always havea slightly militaristic look to them. In unsettled areas, they double as fortresses. Even in settled or urban areas they usually contain open, grassy courtyards where soldiers can train.

Heironeous sends his avatars to prevent or reverse great injustices, to aid courageous mortals fighting against desperate odds, and anywhere he suspects the hand of Hextor at work.