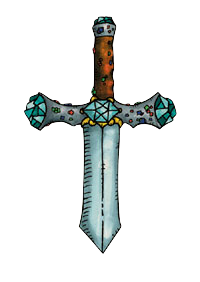 The dwarven deity of greed, Abbathor (ab-bah-thor), is a being literally compelled by his greed. He has, at times, been the ally of the other dwarven gods, but his treachery and lust for treasure make him a dangerous associate. He will never help any non-dwarven deity or creature. He cannot be trusted to do anything but evil, unless it suits his own purposes to give assistance.

Abbathor was not always as devoted to evil as he is now. Originally, his portfolio concerned the appreciation of valuable gems and metals, not necessarily at the expense of others. He became embittered when Moradin appointed Dumathoin the protector of the mountain dwarves instead of himself, and from that day forward has become ever more devious and self-serving in his endeavors, in a continual effort to wreak revenge on the other gods by establishing greed – especially evil greed – as the driving force in dwarves’ lives.

The Great Master of Greed exerts an influence, no matter how subtle, over every dwarven heart. Abbathor teaches that greed isn’t only desirable, but necessary to keep the dwarves in a strong and safe position. He is the only advocate for change within the dwarven pantheon, not stability, often inspiring dwarves to seek shortcuts – a pursuit that is culturally frowned upon. In this sense, while he espouses greed and treachery, he is also the standard bearer for revision and innovation. His guidance is especially critical when a clan faces an unanticipated situation that requires quick, decisive action.

“Seek to acquire all that shines or sparkles, and revel in the possession of such. The wealth of the earth was created for those dwarves strong and crafty enough to acquire it by any means necessary. Greed is good, as it motivates the acquisition and holding of all that is truly precious. Do not seize wealth from the children of the Morndinsamman, however, nor conspire against the favored of Abbathor, for such strife in the name of avarice weakens the clan."

This last aspect of Abbathor’s dogma is called “Abbathor’s Commandment”, and is frequently used to chide potentially over-eager dwarven thieves. The Abbathorans do not like to remember that this was uttered purely in order to preserve some members of the faith after angry fellow dwarves had slaughtered thief after thief in the robes of Abbathor’s clergy.

Solar eclipses, or any other day when the sun is suddenly blotted out, such as during a volcanic eruption, are holy days in the Abbathoran chuch.

The most holy rite of the Abbathoran church is a yearly sacrifice of an enemy of the dwarven people, which can be “anything from an elf to a boar”. Orcs, trolls and giants are preferred. Such a creature is strapped to the altar and killed, then the faithful offer gems, which are placed within the blood staining the altar – the more valuable the offering, the greater it is believed Abbathor will benefit the offerer in the next year. Then the corpse and its gems are all burnt.

Although publically reviled in dwarven society, his influence is strong enough that he is begrudgingly accepted. His temples consist of underground caverns of secret, windowless rooms dominated by massive, plain blocks of stone; these serve as sacrificial altars where offerings are burnt. The rest of the chamber is usually richly decorated, with gold leaf on the walls and caches of purloined treasure – the holiest temples of Abbathor are the captured lairs of dragons.

Novitates in the faith of Abbathor are called Goldseekers, whilst full-fledged priests are referred to as the Hands of Greed. In ascending order of rank, Abbathoran priests are called: Coveters of Copper, Seekers of Silver, Hoarders of Gold, Plunderers of Platinum, and Misers of Mithral. The high priests are collectively known as the Masters of Greed, but they take their own unique titles.

Priests of Abbathor always dress in red – a brilliant scarlet, specifically, which is worn as underclothing for everyday use and as over-robes for ceremonial occasions. Over this is worn leather armor with leather caps (never helms), or else dark crimson robes. No priest of Abbathor will ever wear wealth openly.

Abbathor himself is rumoured to have servants that consist primarily of Rappers, the undead forms of his dwarven worshipers who died attempting to steal something.

Abbathor appears as a tall, fat, piggy-eyed dwarf with sallow skin, a squat, hunched build, yellow-green eyes, and a sharp, hooked nose. He seems to slither and sidle along as he walks, never making much noise but often rubbing his hands together. If carrying precious stones or metals, he often unconsciously touches them, frequently caressing them in a sensuous manner. He has a harsh, husky, wheedling voice and a quick temper, hissing and spitting when angry.