The blessed of Corellon Larethian – or Idari – are one of the oldest kin of Orth, but not always the wisest. The elves' history is one fraught with conflict fueled by a clash of hubris with the calling of the wild.

Darkvision. Attuned to moonlit forests and starry night skies, elves have superior vision in dark and dim conditions. They can see in dim light within 60 feet as if it were bright light, and in darkness as if it were dim light. They can’t discern color in darkness, only shades of gray.

Fey Ancestry. Their ancestry provides them with an advantage against being charmed, and magic can’t put you to sleep.

Trance. Elves, in fact, don’t sleep at all. Instead they meditate deeply, remaining semiconscious, for 4 hours a day as a means of resting.

Sun elves are thin and lightly built creatures that, nevertheless, carry themselves with a grace and majesty that is poised to diminish anyone around them. It is said that, of all their kin, they are the ones closer to their maker, and for this they are also called Highborne. With a skin of bronze and hair of copper, black, or golden blond, they are blessed with a keen mind and a mastery of magic that shines through their eyes of golden, silver, or black. Some believe themselves to be superior to anyone else, and the lands to the west of Eridor are said to house their ancestral home: a place few can say to have ever seen.

Still, it is not rare to see a sun elf among other folk. They crave knowledge and their long lifespan can easily lead them to positions of power, specially in human lands. 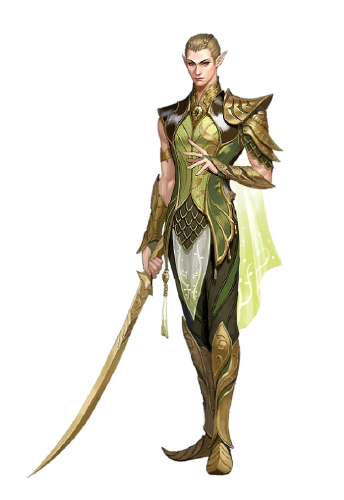 Elf Weapon Training. Most sun elves have proficiency with the longsword, shortsword, shortbow, and longbow. Some forgo a number of these in favor of another simple/martial weapon, or tools.

Cantrip. The magically-learned sun elves know one cantrip of their choice from the wizard spell list. Intelligence is the spellcasting ability for it.

Extra Language. Sun elves can speak, read, and write one extra language of their choice.

The wood elves are the most common Idari in the realms. Deeply connected to the fabric of nature and to the ways of the The Old Faith, urban centers of civilization are not their preferred dwelling. But one needs not walk far into a forest to feel their presence, for they left the ancestral home of the elves long ago and spread across the woodlands of the world pledging their lives to the protection of the natural order of things.

This connection to the wilderness is plain to see for their skin tends to be copperish in hue, sometimes with traces of green. Likewise, their hair tends toward browns and blacks, but it is occasionally blond or copper-colored, and their eyes are green, brown, or hazel. 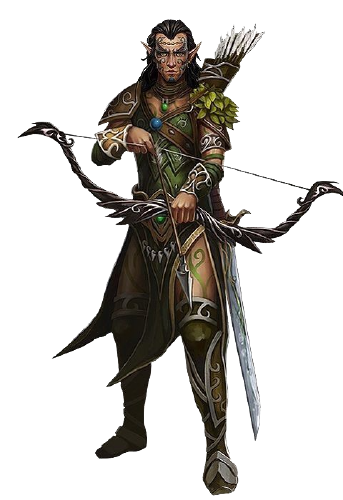 Elf Weapon Training. Wood elves have proficiency with the longsword, shortsword, shortbow, and longbow. Some forgo a number of these in favor of another simple/martial weapon, or tools.

Fleet of Foot. Wood elves are lite and quick, with a base walking speed of 35 feet.

Mask of the Wild. Acclimated to the outdoors, wood elves can attempt to hide even when they are only lightly obscured by foliage, heavy rain, falling snow, mist, and other natural phenomena.

While it is correct to associate the elves to the natural world, this usually leads to the erroneous assumption that they make their dwelling solely within lush forests. In truth, elves embrace all facets of creation both on the surface, and below. Driven by a calling not unlike their wood elf cousins, the colloquially called night elves decided to leave the surface long ago, making their way into the dark and cavernous world below.

But even though they live underground, night elves are much more than cave-dwellers. Their cities are as magnificent as anything built by surface elves, and their defenses are just as secure. Unlike the dwarves, that found their place by carving the earth around them with strength and skill, the night elves melded into their surroundings with their most important sites located inside immense, hollowed-out stalactites and stalagmites, with entrances well guarded.

Night elves tend to be smaller and thinner than most elves, have black skin that resembles polished obsidian and stark white or pale yellow hair. They commonly have very pale eyes (so pale as to be mistaken for white) in shades of lilac, silver, and blue.

Seeing night elves on the surface is quite a rare occurrence, but some often journey upwards in nights of full moons to pray to the goddess Sehanine Moonbow, or her adopted daughter Eilistraee. For this, they are also commonly called moon elves. 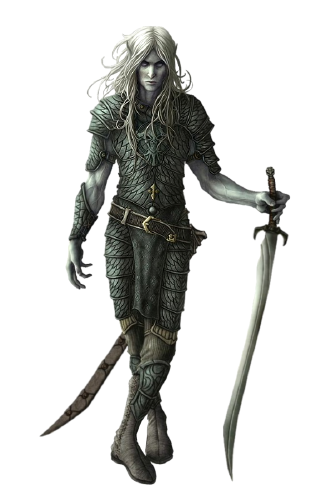 Superior Darkvision. A night elf’s darkvision has a radius of 120 feet.

Sunlight Sensitivity. Night elves have disadvantage on attacks and Wisdom (Perception) checks that rely on sight when they, the target of their attack, or whatever they are trying to perceive is in direct sunlight.

Night Elf Magic. Night elves know the dancing lights cantrip. When they reach 3rd level, they can cast the faerie fire spell once per day. When they reach 5th level, they can also cast the darkness spell once per day. They must finish a long rest in order to cast these spells again using this trait. Charisma is the spellcasting ability for the spells.

Night Elf Weapon Training. Night elves have proficiency with rapiers, shortswords, and hand crossbows. Some forgo a number of these in favor of another simple/martial weapon, or tools.

When the primal night elves chose to make their way underground, some lent their ear to an ancient enemy of the elven gods of good. The goddess Lolth – eternal adversary of all surface elves – cast her web of influence onto them, and led them deeper and deeper undeground into the realm of the Underdark. Throughout ages spent in such a forsaken place, subsisting on tainted water and food, always beseeching their goddess for guidance and following her poisonous dictates, Lolth’s worshipers gradually transformed into the drow: vengeance made flesh.

Under the Spider Queen’s dominance, drow society has flourished and poses a constant threat to all. They are taught, since they are old enough to understand, that they’re superior to all other creatures, for they remain steadfast in their devotion to Lolth despite the hardships of their existence. Any creature that isn’t a drow is unworthy and among these other, lesser forms of life, the elves that live above are especially despised because they are descended from the primal elves who follow those that “betrayed” Lolth so long ago. Those very few who attempt to break free from this eternal cycle of oppression and strife have found in Eilistraee a beacon of hope in their path to redemption.

Physically, the drow are virtually indistinguishable from a common night elf. The singular is exception is the color of their eyes, which is commonly (but not always) a shade of deep crimson red. 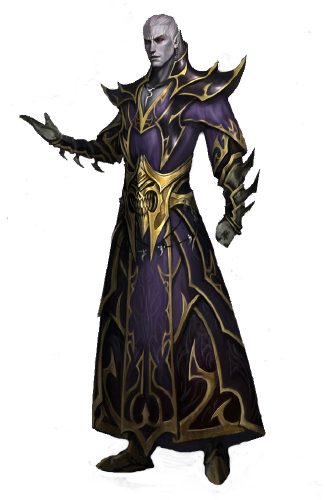 While not common, it is not unheard of that the interplay between elves and humans sometimes blooms into something more. Half-elves are born of these relationships and roam the land as creatures of two worlds. 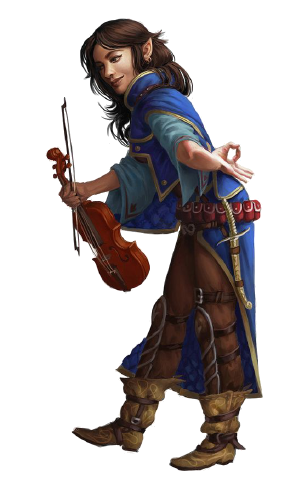 Fey Ancestry. Their ancestry provides them with an advantage against being charmed, and magic can’t put you to sleep.