These are the stout people of Eridor that call the enormous mountain range splitting the continent in half their home. It is integral to their identity, and deeply rooted in their beliefs. They call it Moradin’s Spine.

Darkvision. Accustomed to life underground, dwarves have superior vision in dark and dim conditions. They can see in dim light within 60 feet as if it were bright light, and in darkness as if it were dim light. They can’t discern color in darkness, only shades of gray.

Dwarven Combat Training. Dwarves commonly have proficiency with the battleaxe, handaxe, light hammer, and warhammer. Some forgo a number of these in favor of another simple/martial weapon, or tools.

Stonecunning. Dwarves are exceptionally proficient (adding double their proficiency bonus to a check) in discerning the historical origin of stonework.

Tool Proficiency. Most dwarves are proficient with an artisan’s tools of their choice – learned through their youth to adulthood – like smith’s tools, brewer’s supplies, or mason’s tools. Some forgo this in favor of proficiency with a simple weapon.

The proud and strong mountain dwarves hail from the sole remaining great kingdom under the mountain: Hoskengar Hold.

Fierce fighters and expert smiths, they are as tough and strong as the natural stoneworks they dwell among, and see themselves as the true progenitors of their kind and the exemplars of their gods' traditions and teachings.

Mountain dwarves maintain a strong martial tradition. They know that the great wealth they accumulate in their vaults makes them prime targets for raiders. As a result, all the adults in a typical mountain dwarf clan are trained in the use of armor and weapons.

Miners are among the most revered members of a clan, since the tunnels and shafts they dig in search of ore are considered works of art in themselves – as much a part of a clan’s legacy as any treasure chamber heaped with gold and gems.

The tragedy that befell their brothers to the south has influenced much of their attitude towards the outside world. Fervent militancy and the need to protect their mines leads them into frequent clashes with Underdark monsters. Creatures or raiding parties that enter the mines from below invite retributive raids by dwarf war parties. The dwarves will mount an ambitious assault to reclaim even a single miner captured by attackers.

They maintain tenuous relationships with humans, scoff at most elves (a notorious exception being the night elves), and are generally suspicious of all strangers. The counter to their isolationism is a close relationship with rock gnomes, whose tinkering nature found an unlikely place in the stone-cold halls under the mountain. 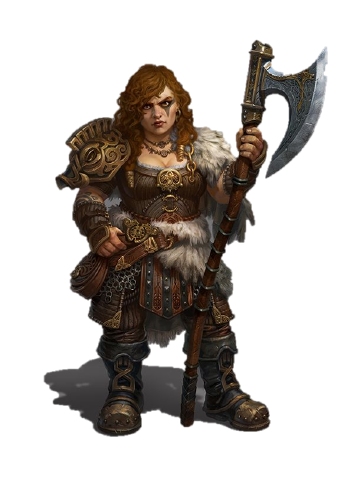 Dwarven Armor Training. The martial culture of mountain dwarves commonly provides them with proficiency with light and medium armor, but some focus instead on a simple (or martial) weapon, or on a tool, instead of any of those armor proficiencies.

Commonly known as hill dwarves, these Haarkengar are the descendants of the few survivors from the fall of Haarkengar Hold in the Great Eruption. With their kingdom lost, those too proud to flee north seeking shelter with their Hoskengar brothers, sought new beginnings on the foothills near of what would soon become the Endorii desert.

Tragedy caused a profound shift in their beliefs, values, and attitude towards life. Brought closer to other cultures, hill dwarves became more perceptive and empathic than their mountain brethren. They rely on their intuition and insight to guide them in relationships with other people. They frequently form defensive pacts with humans, elves, and developed a particular kinship with the stout halflings.

To offset the disadvantage of not being protected by mountains, they build stone fortresses that start above ground and end in chambers that tunnel deep beneath the surface. A typical clan’s settlement features stout walls and a sturdy gate, inside which are living quarters, community areas, and a well-protected treasure vault.

Although the best artisans are revered for their skills, just as in any dwarf clan, hill dwarves put special emphasis on diplomacy and trade as key elements in the clan’s survival. They appreciate the value of creating high-quality goods to trade with others, both to enrich the clan and to form bonds with neighbours. 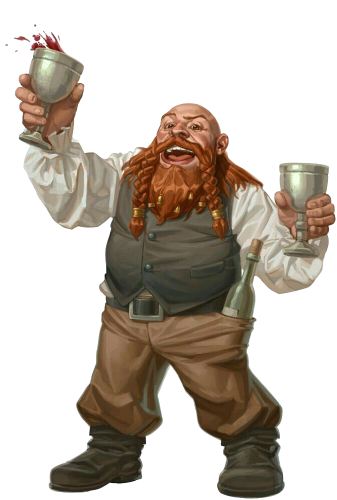 In ages past, when almost all of the dwarves were said to be more than content to make their homes inside the mountain spires of Moradin’s Spine not digging too far beneath the surface, the dwarves of clan Duergar became invested with delving deeper and deeper into the earth. Against the warnings of their fellow mountain dwarves, they insisted that a great trove of riches lay just beyond the next strike of a pick.

This endeavour soon became an obsession, consuming the full attention of the clan’s community as a whole. Contact with them was progressively lost while they dug and tunneled further, and further, down. The weakest among them fell dead from exhaustion, the rest pausing only long enough to push the corpses aside so they could continue the digging.

They eventually broke through into a large cavern, and found themselves in the Underdark faced with the true source of their obsession. A great Elder brain – a large monstrous aberration with psychic powers – waited there, alongside its mind flayer covenant, ready to finally subjugate them. The monsters had sent out a psychic lure that played on the dwarves' greed, and so it came to be that the survivors of clan Duergar became prisoners.

For countless years, they were subjected to slavery and all manner of grisly experiments that slowly, and irrevocably, changed the fallen dwarves.

In time, however, a leader arose among the enslaved dwarves. He struck a deal with [Asmodeus]({{ relref “/lore/planes/outer/nine-hells/index.md” }}), pledging the assistance of clan Duergar against Lolth’s ambitions in the Underdark. And with the help of the Lord of the Nine, the dwarves finally overthrew their masters in a great uprising.

The damage, however, had already been done. Cut off of dwarven society for so long had turned them into social pariahs, spoken only as an object lesson concerning the fate of dwarves who stray from Moradin’s teachings. Prideful and stubborn, as only dwarves can be, the lost clan descended back to the Underdark where it remains to this day, finally free. 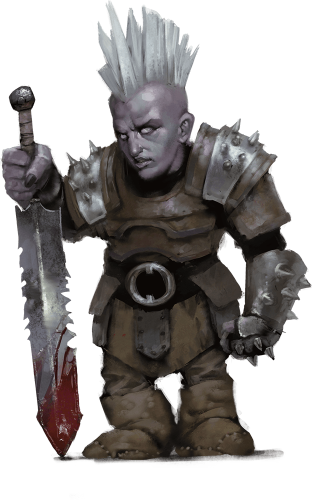 Duergar are short and stocky, like any typical dwarf. They are usually thinner than their dwarven brethren and have the unfortunate – and complete – lack of capacity to grow facial hair. The most obvious physical feature of a Duergar, however, is their dull gray skin and hair from which their colloquial name derives.

Superior Darkvision. A duergar’s darkvision has a radius of 120 feet.

Sunlight Sensitivity. Duergar have disadvantage on attacks and on Wisdom (Perception) checks that rely on sight when they, the target of their attack, or whatever they are trying to perceive is in direct sunlight.

Duergar Resilience. Gray dwarves have advantage against illusions and against being charmed or paralyzed.

Duergar Magic. When a gray dwarf reaches 3rd level, they can cast the enlarge/reduce spell on themselves once with this trait, using only the spell’s enlarge option. When they reach 5th level, they can cast the invisibility spell on themselves once with this trait. They don’t need material components for either spell, and they can’t cast them while they are in direct sunlight, although sunlight has no effect on them once cast. They regain the ability to cast these spells with this trait when they finish a long rest. Intelligence is the spellcasting ability for these spells.

Extra Language. They can speak, read, and write another language (usually Undercommon).