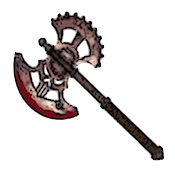 The Mighty One, The High Chieftain, The Battle Lord, Fiery-eyes, The Lord of Depths and Darkness

Both goblins and hobgoblins worship Maglubiyet (ma-glub-i-yet), the Mighty One. He appears as a huge black goblin-type with red flames for eyes, sharp fangs and clawed hands. He is a war god and a great general commanding mighty armies of goblin spirits in the Infinite Battlefield of Acheron, where they eternally war against Gruumsh’s orcish spirit army. His shamans claim that Maglubiyet always wins these battles, but the nature of endless battle in Acheron, means destroyed orcish spirits always re-form.

In times past, Maglubiyet had two sons who served as his lieutenants. However, in true goblin fashion, he decided that they were a threat. To get rid of them he sent them on suicide missions against the orcs and dwarves until they were slain.

Maglubiyet revels in conflict and destruction and constantly pushes his followers to wage war, particularly against dwarves and gnomes. He encourages goblins to increase their numbers in order to overrun their enemies. As a paranoid god he is prone to destroy lesser goblin entities when he suspects treachery or he thinks they are becoming too powerful.

The Mighty One requires sacrifices of creatures with souls, and these ceremonies usually take place once per month (on nights of a new moon) by dispatching victims with an axe. Ideally, captured dwarves and/or gnomes should be offered up, then any other demi-humans or humans. Failing this, other goblinoids or even hapless junior members of the cult are offered.

Maglubiyet’s shamans are almost always drawn from the goblin and hobgoblin ranks. They are aggressive, pushy creatures who must constantly strive for rulership and influence. Those aspiring to tribal leadership are encouraged to help the current incumbent along to the next plane of existence, usually without their permission. They are war leaders from the front, and constantly stir up goblins for the purpose of war. His goblin worshipers are sometimes referred to as the “sons of Maglubiyet”.

His places of worship are cave temples, where shamans commune with him through states of trance. Maglubiyet is also known to make his will known through omens that are then interpreted, leading usually to bloody results.