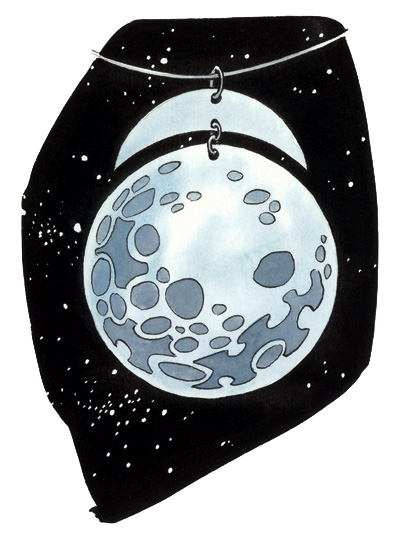 Daughter of the Night Skies, Goddess of Moonlight, the Lunar Lady, Moonlit Mystery, the Mystic Seer, the Luminous Cloud, and Lady of Dreams

Sehanine Moonbow (seh-ha-neen moon-boe) is the elven goddess of death, dreams, and travels. The night’s sky is her dominion, and the full moons are her reflection.

Among all elvenkind, Sehanine is most commonly worshiped by the night elves whom, when leaving the protection of the woods and venturing underground, found in the eternal night a source of communion with her. For this, they are also known as moon elves.

Sehanine is very protective of all elves, sending omens to keep her people from danger and empowering her devout clerics to craft illusions of protection around elven hideouts. This devotion is born out of her profound love for the Ruler of All Elves, Corellon Larethian.

In ancient times Sehanine sought the favour of Corellon, only to find him already enamoured by Araushnee. Distrustful of her from the start, it all came to a head when Sehanine foiled a plan by Araushnee to murder Corellon after the future Queen of the Demonweb Pits stirred Gruumsh’s bloodlust against him. Araushnee was banished, and thus Lolth was born.

She eventually became Corellon’s consort, taking up Eilistraee as her adopted daughter. But beyond sharing a dedication to the safeguard of the night elves, they have a strained and distant relationship.

Sehanine is a being shrouded in mystery and secrets, rarely speaking her mind directly – if she speaks at all. She is quite an aloof deity, and beyond ephemeral communication with her followers, she keeps herself apart from the happenings of the world. Her power waxes and wanes with the phases of the moons.

She is intolerant towards necromancy in general, and hates the undead. Her followers make it their duty to destroy these beings.

Life is series of mysteries whose secrets are veiled by the Luminous Cloud. As the spirit transcends its mortal bounds and new mysteries are uncovered, a higher form is achieved and the cycle of life continues. Through contemplation and meditation, communion with the Lady of Dreams is achieved. Through dreams, visions, and omens revealed in sleep or the reverie, the Daughter of the Night Sky unveils the next step along the path and the next destination on the endless journey of mystic wonder that is life and death and life.

Much like her patron deity, the church of Sehanine is clouded in mystery, with little being know about its hierarchy. Her clerics are the seers and mystics of elven society, serving as spiritual counselours to everyone: from elven kings, to common folk.

Clerics of Sehanine are the shepherds and protectors of the dead, organizing and administering funeral rites while guarding the remains of the fallen. As defenders of elven homelands, Sehanine’s clergy is responsible for weaving and maintaining the illusions that guard the sanctuaries that remain, and for divining potential threats to their continued existence.

The avatars of Sehanine are said to look like a small youthful, ageless, female elf clad in a translucent gown that seems like it is made of moonbeams.