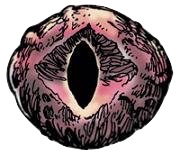 Gruumsh (groomsh), is the chaotic evil deity of orcs. He appears as a hulking orc in black full plate armor, with one unblinking central eye. He harbors a special hatred for Corellon Larethian, Moradin, and their followers. In ages past, Corellon Larethian put out Gruumsh’s left eye in a fight. Some of his clerics dispute this tale, claiming that the elven deity stole the eye because he could not beat Gruumsh in a fair fight.

Luthic is his consort, in a position that Gruumsh believes to be of subservience. Gruumsh defends that the orcish feminine ideal should be one of subordination to male orcs while still protecting the cohesion of an orcish clan, and would have it no other way with his chosen mate. In reality, the Cave Mother blindsides him in a constant battle to foil his cruelty, temper his rage, and to slowly break the ruthless grasp he holds on his own creation. Most religious scholars argue that it is Gruumsh’s own missing eye that blinds him to the truth by his side.

Gruumsh demands that his followers be strong, that they cull the weak from their numbers, and that they take all the territory Gruumsh thinks is rightfully theirs (which is almost everything). He tolerates no sign of friendliness from his people, a point which became a source of profound grievance to him the more of his people strayed from his path. Unceasing warfare is his creed, though Gruumsh does not object to simple colonization if that can be arranged.

Gruumsh dislikes everything that is not an orc or of orcish make, and he feels particularly spiteful toward elves (over the matter of his eye). He feels equal malice toward dwarves, who contested with the orcs for control of the mountains and won; a state of affairs Gruumsh regards as strictly temporary.

Gruumsh’s avatars are always hulking male orcs clad in black full plate armor. Sometimes they have a single unblinking central eye, and sometimes they have an empty left eye socket. Gruumsh usually doesn’t dispatch his avatars anywhere unless he suspects machinations against the orcs by Corellon Larethian or another meddling deity.