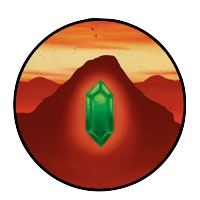 Keeper of Secrets under the Mountain, The Silent Keeper, The Mountain Shield

Dumathoin (doo-muh-thoe-in) is the protector of the mountains, the earth, and all its secrets; metals and gemstones are his gift to the world. He is a silent, unspeaking god, reserving his wisdom for himself.

He is considered the protector of the mountain dwarves, a position which led to the downfall of Abbathor and which did not please him at first for it angered him to see the dwarves “destroy” the mountains he had created for them. But his rage was soothed and changed to admiration when he saw the beautiful objects they crafted from the metal they had mined. Thus he became the patron god of mining.

However, whilst he does not object to tunneling, mining, or keeping treasures underground, he does object to those who plunder the earth’s riches and take them away for unfair or selfish purposes. And dwarves are not exempt from this displeasure.

For this reason, Dumathoin does maintain friendly relations with a few non-dwarven deities, mostly connected to metalcraft and earth. As such, his mortal followers are sometimes involved in business ventures based around selling metals, ores and stone.

The dogma of the Mountain Shield reads thus:

“Walk the deep and silent ways of Dumathoin. Seek out the hidden gifts of the Keeper of Secrets under the Mountain. That which is hidden is precious, and that which is precious shall stay hidden. Seek to enhance the natural beauty of Dumathoin’s gifts and go with, not against, the contours of the deeps. Beauty is in the discovery and the crafting, not the holding. Keep the places of our dead inviolate and well tended; the noble ancestors of our people will neither be robbed nor mocked through the actions of thieves and defilers. Abide not undead creatures, especially those that take the form of dwarves, thus mocking the creation of Moradin."

Temples to Dumathoin are always constructed in deep underground caves; the presence of veins of precious ore or an abundance of gems in the rock is desireable, but not necessary. Each temple’s heart is its simple altar, a large block of stone or a natural boulder, and its adornment takes the form of statues of Dumathoin lining the walls.

Specialist clerics of Dumathoin are called Delvesonns (“Dumathoin’s Hidden Gifts”). The delvesonns seek to uncover the earth’s buried wealth without greed or marring the beauty of what lies beneath. They often supervise mining operations, where they both maintain underground safety, security, and work to beautify what the miners do – cleaning up rubble, growing and placing luminous fungi or edible deep-mossess, and directing water to form underground rivers and aquafiers. They are always hunting for new veins of ore, new sources and species of useful fungi, and new delves or underways never explored before. They also try to identify encountered dangers, so they can determine strategies to deal with them, and bargain with non-hostile folk of the underground to avoid the over-exploitation of resources. There are few who can match a delvesonn when it comes to guiding others safely through the underways, especially if you need to find fresh water and food as you go.

The noviates of Dumathoin’s faithful are called the Uncut; full-fledged priests are the Keepers of the Shield, who progress in rank from Agate through Onyx, Amethyst, Jargoon, Garnet, Topax, Opal, Sapphire and Diamond. Collectively, the most high-ranked priests of Dumathoin are known as the Beljurils, though they take individual titles for themselves.

Dumathoin’s clergy favor leather garments, be it armor or mining gear, as their priestly vestments – in battle, though, they grab the most effective armor possible – and wear earth-brown cloaks and over-robes on top of this. They keep their heads bare and allow their hair and beards to grow long and untamed. They tend to prefer picks, hammers and other mining tools as weapons.

The holy days of Dumathoin’s faith are the Deepstone Triat – the nights of the new moons, and the day directly preceding and following it. Additionally, High Old Ones of the delvesonns can declare other days to be holy – Splendarrsonn – when dwarves discover a major new lode, a lost subterranean treasure cache or delve, or some other great treasure below the earth.

On the holy days, gems are offered to Dumathoin in sacrifice, crushed to a powder and mixed with certain herbs and fungal secretions to form an acrid, purple-and-green fibrous paste. This noxious-looking gunk serves to make rock porous, helps plant matter adhere to the rock, and provides nourishment for plants in contact with it. Delvesonns use this to encourage the growth of underground fungi and plants, both for beautification and for practical purposes, such as establishing edible crops or using these plants to conceal doors or making redirecting watercourses easier.

Protectors of the Dead

One unusual aspect of the delvesonns is that Dumathoin’s portfolio also makes them the primary protectors of the dead. Dumathoin and his faithful are the morticians and tomb-builders of the dwarven people.

There are three primary precepts to burial, as practiced by the delvesonns: the body is washed and three or more stone burial tokens – the corpse’s personal mark, the clan’s mark, and Dumathoin’s mark – are braided into its beard or hair. Secondly, the corpse is clothed in armor (its own if it had it, or else a suit of light mail). Finally, the priest presiding over the burial creates a song honoring the dead dwarf’s life and deeds, which is carved into the lid of their coffin or sacrophagus (or onto the back of a mausoleum seal, a plaque or a marker, as the case may be). This song is never sung out loud, to honor Dumathoin’s own silence. Indeed, the faith holds that speaking or singing the song aloud will invoke a curse, perhaps even wrenching the desecrated corpse back to unlife to smite whoever did so.

Individual clans may change some details, and certain kinds of burial change the formula; these are the most common cases:

Dumathoin appears as a dwarf whose skin is earth brown, whose eyes are silver fire, and whose hair and beard are made of gray stone. He wields a two-handed mattock of solidified magma.