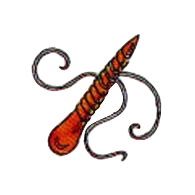 Lady of Our Fate, The Colorless and All-Colored

Istus (ish-tush) is a powerful deity who takes an abstract interest in the destinies of mortal and immortal alike, but holds herself aloof from all other gods. She is said to have a strange companion, a cloudlike being who is a prince from a Demiplane of Time.

In the strange metaphysics of the worshippers of Istus, the multiverse is conceived of as an intricate mesh of interconnected threads, with everything connected to everything else. They are believers in predestination, although the threads of fate are sometimes slack enough that destiny can be altered in some small way. Because the future is for the most part preordained, it can be predicted by those with the skills to perceive how the threads are linked.

Clerics of Istus hold honesty as a virtue, and teach the importance of accepting of one’s destiny and role in the world; those who strive too hard against Fate will only meet their own preordained ruins. Her paladins preach mercy to the injured regardless of circumstance, and stress that every individual has a set path in life, and that to lose that path is to lose ones' self.

The Lady of Fate is often mentioned in ceremonies, but attracts little true devotion. Istus has few true followers and her clerics tend to be stoic and cynical, having seen all the extremes of mortal destinies. They use divinations to discern what fate will bring, and are called upon by nobles and other important people to make predictions about the future. Despite this, her cult is monastic and rarely makes a spectacle of itself.

Clerics of Istus wear gray or black robes. Higher ranking clerics have formal vestments with weblike patterns. They must wear their holy symbols openly and allow their hair to grow at least six inches (approx. fifteen centimeters) in length. Most of them are female.

Followers of Istus are few and rarely congregate. Istus prefers her follower’s prayers reach her ears independently. The average follower of Istus will be a lone traveler on their own pathway to destiny, who heals any who request it and often those who do not.

She is depicted in three different ways: The first is as an old crone, the second as a mature and haughty noble dame, and the third as a cold and unfeeling young maiden. She is always carrying her mystical gold spindle – her holy symbol – with which she creates the strands of fate together, spinning the future into the present, thus weaving the web of fate.