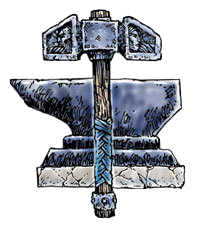 The Soul Forger, Dwarffather, The All-Father, The Creator

The deity of dwarves, Moradin (moar-uh-din), usually appears as a stern-faced male dwarf with a powerful build. His upper body is particularly robust, with a barrel chest, wide shoulders, and arms corded with big muscles. He has flowing black hair and a beard to match, and he always wears full plate armor. He carries a shield and a warhammer.

Moradin forged the first dwarves out of metal and gems and breathed life into them. He governs the arts and sciences of the dwarves: smithing, metalworking, engineering, and war.

Moradin is an adamant defender of the dwarven people he created and of the principles of law and good. He teaches the value of making goods that last, of loyalty to clan, leader, and people, and of meeting adversity with stoicism and tenacity. He tolerates no taint of evil among the dwarves, and as such Lolth’s part in the creation of the Duergar is seen as a desecration of his creation. It is Moradin’s influence that leads the dwarves toward excellence in craftwork and staunch defense of what is theirs.

Clerics of Moradin are charged with maintaining and advancing the dwarven kind in all walks of life. They perform a wide range of public ceremonies (marriages, blessing new ventures, crowning monarchs, and the like). They also educate the young, arrange communal defenses, and sponsor expeditions to settle new lands. They also keep detailed genealogies and historical archives.

Every temple or shrine of Moradin includes an anvil and a forge that the clerics keep perpetually burning. The anvil can be a simple decoration or part of a working smithy, but it often serves as the temple altar.

Moradin’s avatars usually look just like he does, but they sometimes take the forms of earth elementals, xorns, or members of some dwarven subrace. Moradin sends his avatars to dwarven lands to keep discreet watch over dwarven craftworkers and leaders and to guard against interference from Gruumsh, Lolth or other deities of evil subterranean peoples.