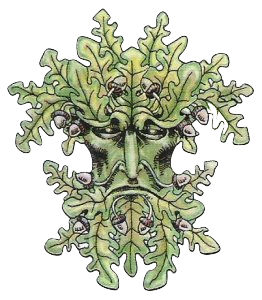 Obad-Hai (oh-bod-high), deity of nature, is most often shown as a lean and weathered man of indeterminately old age, dressed in brown or russet and looking like a hermit, although nonhuman communities depict him as one of their own kind. Obad-Hai plays a shalm (a double-reed woodwind musical instrument, also spelled “shawm”) and takes his title from this instrument. He also carries a staff.

Because Obad-Hai strictly adheres to neutrality, and his favoritism toward certain creatures (notably satyrs and centaurs), a rivalry and antipathy exists between him and Ehlonna of the Forests.

Obad-Hai rules nature and the wilderness, and he is a friend to all who live in harmony with the natural world. He expects his followers to live in harmony with nature in all its variety. Those who destroy or otherwise harm nature deserve swift vengeance in an appropriate manner, says Obad-Hai. Those who are one with nature, however, have little to fear, although the well-meaning but foolish are sometimes brought down by a danger they could not avoid or divert. Obad-Hai teaches that the wilds can sometimes be ugly, dangerous, or terrible, but that these things are a part of nature and should be respected as much as those that are beautiful, harmless, or wonderful, for these characterizations mark a newcomer’s perspective.

Clerics of Obad-Hai have no hierarchy. They treat all those of their order as equals. They wear russet-colored clothing and maintain hidden woodland shrines that are usually located far from civilization. They keep to the wilderness and to themselves, rarely getting involved in society.

A wide variety of peoples serve as Obad-Hai’s clerics, including humans, forest gnomes, halflings, and sylvan fey. They serve as protectors of nature, acting as the agents of retribution when their protection is insufficient or too late.

Temples to Obad-Hai can be located nearly anywhere but are usually located amid groves of oak trees.

Obad-Hai’s avatars vary in appearance, just as he does. He sends them to patrol wild areas and protect them from harm, and to monitor the activities of Ehlonna.