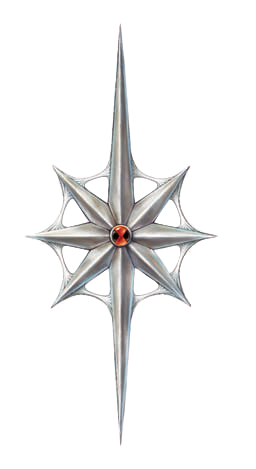 Lolth (lol-th), the drow goddess of spiders, was who first spread evil among the night elves.

Formerly a consort of Corellon Larethian know as Araushnee, the darkness within led her to a growing hatred of everything he stands for, and she was banished to the Abyss for it. Affronted, she sworn vengeance against Corellon and all the elves, which drove her to corrupt a vast number of night elves, leading to the creation of the drow.

She maintains a ruthless, tyrannical reign over her drow, ruling through a combination of fear and promise of power.

Lolth constantly turns one drow against another. She claims to do this to cull out the weak and to make them strong, but she is a cruel and capricious deity who enjoys watching others suffer. She is careful to prevent open or widespread strife among the drow. She does not tolerate campaigns of harassment or attrition among groups of drow, but she does sanction well-planned, swift, and overwhelming attacks.

Lolth expects her people to be shrewd, calculating, and aware of the dangers and opportunities around them. She has no use for sentiment, weakness, or love. She expects her people to rule the entire Underdark (the realm beneath the surface of the earth), eliminating foes that are weak enough to be destroyed and biding their time before attacking other opponents. She also expects them to eventually invade and conquer the surface, not to colonize it but to defeat Corellon Larethian and all the elves.

Lolth rules her people through her clerics, who are exclusively female and organized into noble houses made up of clerics related by blood. The oldest clerics rule the house, with younger clerics following in order by age. Each house also includes noncleric drow related by blood or marriage. The clerics serve as absolute rulers in Lolth’s name. They are the leaders, police, juries, and executioners of drow society.

Nearly every drow home has at least a small shrine to Lolth, even if it is just a spider statue or modest altar. Larger temples to Lolth are usually laid out in the shape of a spider. They serve as meeting places, sacrificial sites, and centers of entertainment for high-ranking drow.

Lolth appears as either a tall, beautiful female night elf or as a black spider with a female night elf’s head. She often sends her avatar to check up on her clerics and intimidate her foes.