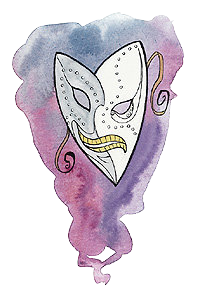 The deity of rogues, Olidammara (oh-lih-duh-mar-uh), most often appears as a brown-haired man of rakish appearance, olive skin, and merry eyes, but he often goes incognito. He is a vagabond, a prankster, and a master of disguise. Olidammara delights in wine, women, and song. His temples are few, but many people are willing to raise a glass in his honor.

Olidammara loves upsetting anyone who seems too attached to an ordered life and a predictable routine. He urges his followers to bend every effort toward mastering the art of music. He also teaches that life is meant to be happy and entertaining, and the best jokes need a target to hang them on. The tables can turn on any trickster, and Olidammara’s followers should accept the laugh and appreciate the trick when it happens to them. Wine, Olidammara says, is one of the joys of life, and the only thing better than making wine is drinking it. Avoid misery, temperance, and solemnity, for they are the greatest poisons to the soul.

Olidammara’s religion is loosely organized, but his clerics are numerous. They usually work among urban folk or wander the countryside. Olidammara’s clerics often have a second occupation, such as minstrels, brewers, or jacks-of-all-trades. Thus, they can be found almost anywhere doing or wearing anything.

Olidammara’s avatars can look like almost anything, though he prefers his own humanlike form. He sends them to perpetrate jokes on other deities and notable mortals.