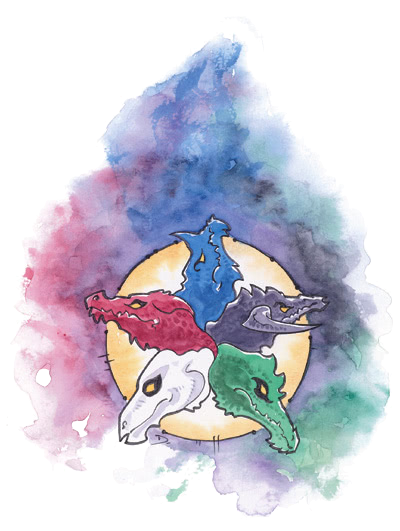 The Chromatic Dragon, Queen of the Evil Dragons

Tiamat (tee-ah-mat), like her archrival, Bahamut), is revered as a deity in many locales. All evil dragons pay homage to Tiamat; green and blue dragons acknowledge her sovereignty the most readily. Good dragons have a healthy respect for Tiamat, though they usually avoid mentioning her or even thinking about her.

In her natural form, Tiamat is a thick-bodied dragon with five heads and a wyvern’s tail. Each head is a different color: white, black, green, blue, and red. Her massive body is striped in those colors.

Tiamat has many consorts, include great wyrm dragons of the white, black, green, blue, and red types.

Tiamat concerns herself with spreading evil, defeating good, and propagating evil dragons. She enjoys razing the occasional village, city, or country, but only as a diversion from her subtle, world-spanning plots. She is the villain who lurks in the shadows. Her presence is felt but seldom seen.

Tiamat constantly seeks to extend the power and dominion of evil dragons over the land, particularly when her subjects find themselves embroiled in territorial disputes with good dragons. Tiamat also unfailingly demands reverence, homage, and tribute from her subjects.

Like Bahamut, Tiamat has few clerics and even fewer temples. She accepts only evil clerics. Tiamat’s clerics, like Tiamat herself, seek to place the world under the domination of evil dragons.

Though most evil dragons honor Tiamat, few keep shrines dedicated to her in their lairs because they don’t want Tiamat’s greedy eyes gazing at their treasure hoards. Instead, they dedicate vast, gloomy caverns to their deity and keep them stocked with treasure and sacrifices.

Tiamat is very active in the world. She usually travels in the guise of a bewitching human or elven female. Several evil dragons of various types either accompany her in disguise or lurk out of sight nearby.