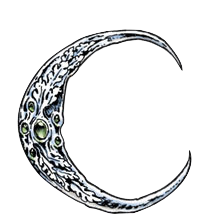 Creator of the Elves, The Protector, Protector and Preserver of Life, Ruler of All Elves

Corellon Larethian (core-eh-lon lah-reth-ee-yen) is the creator and protector of the elven people. He governs those things held in highest esteem among elves, such as magic, music, arts, crafts, poetry, and warfare. Gruumsh – creator of the orcs – is his nemesis, and it is because of Corellon’s battle prowess that Gruumsh is called One-Eye.

Lolth – then Araushnee – was once his wife, Eilistraee is their daugther, and Sehanine Moonbow is his consort.

Corellon concerns himself with all aspects of elven welfare. He also remains alert to any taint of evil among the elves, and he seeks to stamp out any evil influence the moment it appears.

Corellon spurs his people toward self-reliance, vigilance against danger, and appreciation of the world’s beauty. It is Corellon’s influence that leads elves to study magic and swordplay for the duration of their long lives, to serve as guardians and caretakers of the forests, and to appreciate aesthetic pleasures in spite of their warrior heritage.

Corellon’s clerics often wear blue cloaks. They serve as leaders, teachers, diplomats, and generals in elven communities. They train others in the arts of combat and magic while honing their own skills, and they serve as mediators in any disputes that may arise from the elves’ independent lifestyle. They usually seek to maintain cordial relations with other good, sylvan creatures.

Corellon’s temples can be located anywhere elves live, usually in sylvan woodlands. Though always beautiful and designed to blend in with the surrounding landscape, they are invariably both sturdy and defensible. They are often placed on hilltops, river crossings, and other locations of strategic significance. Living plants or trees are always included in a temple of Corellon, either as decoration as part of the structure.

Corellon’s avatars are usually, but not always, male. They usually appear as androgynous elves, clad in a sky-blue cloak and armed with a longbow and longsword and also wearing a large circular amulet that bears his crescent moon symbol. They have a lithe and swift look about him, and their movements are both swift and graceful. Occasionally Corellon takes the form of other sylvan creatures such as centaurs, dryads, pixies, or treants.

He sends his avatars to patrol the borders of elven lands to keep discreet watch over elven crafters and leaders.