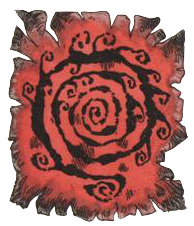 The Chained God, The Ebon God, The Unmaker, He of Eternal Darkness

Ancient dark god of malign decay and madness, Tharizdun (thar-iz-dun) craves nothing less than the unmaking of the universe, reducing all – himself included – to literal nothingness. Accordingly, the other gods imprisoned him away beyond the bounds of the universe he wants to destroy, fearing his dread dreams would come to pass.

Now, Tharizdun is trapped alone in a prison demiplane, somewhere in the depths of the Ethereal Plane, from which he cannot free himself. His conduits to the Material Plane and the rest of the Great Wheel are few and tenuous, and only learned sages know that Tharizdun was ever worshipped. But Tharizdun’s cults still persist, and under the cover of darkeness insane priests labor tirelessly to free their dark master from his prison, hoping to aid him in the destruction of all.

Tharizdun’s cultists call him by many names, some believing that Tharizdun will give them positions of power in a new universe he intends to create when he’s destroyed this one. In the meantime, they perform rites unspeakable even by the standards of other evil deities and seek out new forms of magic wherever they can.

The very threads that weave the universe together must be torn assunder, then burned, then the ashes scattered, until all is nothingness and no one exists to remember existence. As an inscription in one of Tharizdun’s black pyramids said: “Light must be snuffed, perfection decayed, order dissolved, and minds fragmented."

Tharizdun’s dark whispers are entropy themselves, and thus his dogma doesn’t get more complex than that. Give the insanity rampant among his clerics, any discussion about his will often degenerates into screams and ululations.

Clerics who worship He of Eternal Darkness are offered great power, but the price is often the cleric’s sanity. The more dark blessings a cleric of Tharizdun receives, the more tenous her grip on reality.

Tharizdun’s few remaining temples (often in the shape of black ziggurats) and unholy sites are far from civilization and well hidden. Public knowledge of a site devoted to Tharizdun is enough to raise an army of crusading paladins – specially of those aligned with Pelor. His cults guard these sites carefully and rarely stray from them, for their dark god has great difficulty granting spells far from the ancient sites once devoted to him.

His followers also place great importance on the number three. There are believed to be 333 Gems of Tharizdun, each able to grant power to a cleric of Tharizdun in contact with minor unholy artifacts such as these.

Tharizdun’s avatar takes the same form he does: a pitch-black, roiling amorphous form. His avatars can’t leave Tharizdun’s prison either, but they’re the only companions the Ebon God has, so he’ll occasionally create an avatar to converse with, fight, or perform some unspeakable rite.

Rumours persist, however, that one of his avatars remains trapped somewhere on the Material Plane, unable to leave but also beyond the watchful eyes of the other deities.